Since the blog that inspired me, Weathering Wildstorm, came back, I figured it was fitting for me to do a new post as well!

In Flash #750, coming off the series “Flash Forward”, Flash Wally West sits in the Metron Chair, an object from the New Gods that grants him omnipresence. With it, he’s able to see every Earth and timeline from the past and present, and upon seeing the Wildstorm Earth, he mentions its heroes are “more wild and unpredictable than he could imagine.”

That’s it for this one-panel cameo, though there are a few things that bear commenting: For one, Deathblow was mistakenly coloured black. Could this be caused by his new black incarnation in the pages of “The Wild Storm”? Secondly, this is the first time we’ve seen Union and Backlash since the end of the old WSU in 2011, and Backlash is, of course, drawn by his legendary artist Brett Booth. 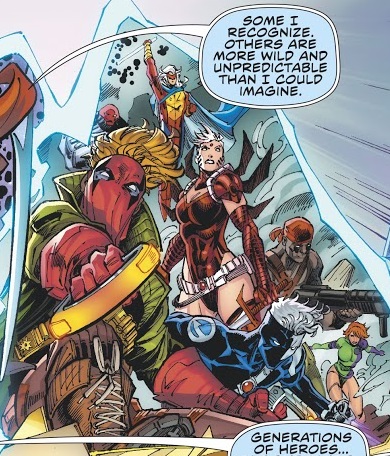 Side note: Some of you might have wondered if there were some Wildstorm cameos in “Doomsday Clock” issue 12. The answer, sadly, is no. Just copycats. This isn’t Zealot:

And this isn’t Fuji: