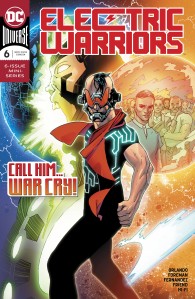 This was a very small, unexpected cameo: The series “Electric Warriors” takes place after “Kamandi: The Last Boy on Earth”, a 70’s series that showed Earth ravaged by a mysterious Great Disaster. In Electric Warriors  we catch a glimpse of the past before the Disaster: supervillain extraordinary Lex Luthor predicted it, so he gathered a cabal of the most prominent supervillains to warn them. Among them, surprisingly, is Helspont. He doesn’t get any lines or anything, but we’re told he didn’t believe Luthor, and that caused his demise.