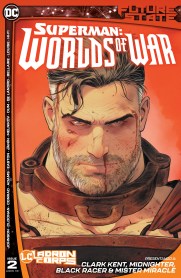 This story takes place in 2030, five years after “Grifters“, and ten years after the current day, so to say we’re dropped “in media res” would be an understatement. However, here’s a few things we can surmise from current comics: Superman has created a new Authority team with Midnighter and Apollo, who are married again!

In 2030, Midnighter finds himself in Warworld, home to alien tyrant Mongul. He was meant to save Superman, who was trapped in its colliseum, but an electronic bug drops a package for him sent by Midnighter from 2021. Inside, there’s a communicator with which current-day Midnighter explains Trojan Solutions is developing an isotope similar to Kryptonite called Nirodhium to erradicate all organic life and leave only robots. Future State’s Midnighter’s job is to deliver a payload to the Chrysalis Collider, a satellite orbiting the planet which is refining the slag of Warworld into Nirodhium. Midnighter isn’t used to taking orders, but his supercomputer isn’t pinging on any deception, so on he goes. Leaving Warworld, Midnighter bumps into Mr. Miracle, and tells him to send a subspace message to The Authority (First mention in DC!) or the JLA for backup; things are about to hit the fan and Superman can use all the help he could get.

After using a door, entering triggers a silent alarm, and the proximity to the collider is short-circuiting his supercomputer, but Middy deals with the cyborg guards easily. As he runs towards the spot where he must drop his payload, he struggles against more cyborgs and killer robots as he must fight without his supercomputer and even the voice in his head goes offline. Finally, he meets the station’s boss: Apollo! Unphased, Middy shoots him, revealling it’s just a robot that looks like Apollo. Middy didn’t need his supercomputer to know that: he knows his husband. That’s right, the power couple is married again!

The fake Apollo introduces himself as Andej Trojan, founder and CEO of Trojan Solutions. He explains he used an implant in his brain similar to Midnighter’s to amass wealth, and he concluded human suffering is rooted in their flesh, so he’ll free them, starting with killing Superman. He’s surprised by Midnighter’s communicator, noting it’s stolen Trojan tech. He also explains his collider bends space-time to age the slag waste of Warworld milennia in minutes. That’s great for Midnighter, since he can’t kill Trojan’s body, so he opens the nexus and unleashes spacetime. Middy is aged down to a child, then he begins aging rapidly – when he’s about to die of old age, he finally delivers the payload. This allows 2021 Midnighter to arrive, destroy the machine and Trojan, who begins a self-destruction sequence. Young Middy gives Old Middy the Nirodhium and Trojan’s head and sends him through a door, explaining they’re in a time loop and now it’s his turn to give the next Middy directions.

In the present, Middy has two immediate objectives: to find a way to escape the time-loop and to repair his implant. He decides to start on the latter by borrowing Trojan’s CPU–and then he plans to visit the young, fleshy Trojan and have some words with him.