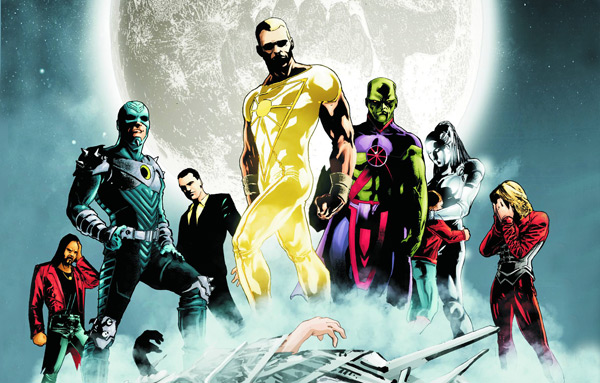 I thought I’d make an individual post detailing the new features of StormWatch in the New52, considering it’s one of the most developed concepts, next to the daemonites.

StormWatch is very different to its Wildstorm counterpart, being much more similar to Authority and Planetary. In the New52, they’re a secret group that deals with the hidden history of the world, ending threats that people never hear about. They first formed in the 11th century, aided by the mage Merlin after he had a vision of the coming threat of the daemonites. When they heard this warning the group misheard the words “daemonites”, and used them to call themselves the Demon Knights.

The team had various incarnations and names across the centuries, but there are always constants. They are ruled by mysterious people who call themselves the Shadow Cabinet, four beings from the Island of Avalon, the island from mythology where heroes go rest after they die; it is located within the Bleed. These people are never seen but they pay StormWatch’s enormous paychecks and erase the member’s identities from the public records; they even guided Merlin to create the first team in the Dark Ages. They created StormWatch to accomplish a secret purpose: prepare Earth for the coming of the dark god Brainiac, the “storm” they need to watch for. Another constant is all of the team’s line-ups include passing roles: like Engineers, century babies, Eminences of Blades, Kings of the Cities and others.

The century baby from the 11th century, who joined the Demon Knights, was called Princess Janeen. She used the energy from her time; geometry and solid algebra. This group also included the first Engineer, Al Jabr. This team had to bring back Merlin from the Island of Avalon after he was killed by a daemonite, and they clashed with the aliens again when the Demon Knights recovered the Holy Grail the daemonites had hidden.

In the 12th century the century baby was Countess Jeannie. In this age of crusades and atrocities, Jeannie slaughtered both moors and Christians; for money, for glory, just to pass the time. Her vices led the Shadow Lords to dispose of her, teaching her an important lesson of controlling yourself.

In the 14th century the century baby was Sister J, a nurse who engaged in an affair with Merlin. The magician aged backwards, so he witnesses all the StormWatch teams. It was during this time that the event known as the Night of Walpurgis happened, when the daemonites did their first known arrival. The group learned to watch the skies for the red clouds in which the aliens traveled, and because of this they were the first team to call themselves StormWatch.

In the 15th century the team went by the name Veiled Sect; in that time they met in a secret chamber under the Vatican, and the Shadow Lords called themselves the Dark Lords. One of the team’s members was the Vitruvian Man, who fell in love with his teammate Isabella. This went against the Dark Lords’ rules, so they responded by killing the woman. Knowing they would kill him too, Vitruvian Man went into hiding, mourning Isabella through the years and up to the present day.

In the 16th century one of the four Shadow Lords mysteriously disappeared from the Island of Avalon, leaving three of them.

In the 18th century the group debated whether it was moral to be so furtive, but when they went public the different countries started arguing about where StormWatch loyalties laid with. This escalated into what became known as the Seven Years’ War, aka the French and Indian War. It took StormWatch thirty years to change remembered history and erase all traces that they existed. After this, they learned their lesson about remaining in secret.

In the 19th century the century baby was called Jenny Freedom, who escaped from a slave plantation. She fought with the energy of her age: light and steam. The StormWatch of this time had to face the Hidden People: they are regular enemies of all the group’s incarnations, descendants from the Neanderthals who want their kind to become the dominant species. They seek to build “devolver” machines to destroy the Homo sapiens. The StormWatch of this time disbanded temporarily for unknown reasons, until Adam One (Merlin’s real name) brought them back together to find the Three Skulls of Boundless Rule. These objects could alter reality to grant any wish, so they had to make sure they wouldn’t fall in the wrong hands. A team was assembled: Jenny Freedom, Doctor 13, Master Gunfighter and Adam, and they faced Mircalla Nosferata, a vampire who wanted to exterminate humanity.

In the 20th century the century baby was our old friend Jenny Sparks, who embodied the anarchic and electric spirit of her time. StormWatch faced the Hidden People again, but this time their foes managed to build a Devolver. The StormWatch from this time was promptly killed, including their Engineer, Archie Trundle.

The current incarnation witnesses the arrival of the superheroes. Until then StormWatch had had a clear field, they’d been the sole authority. The heroes change everything; they are the sign that this is the group’s final century. It is prophesised that StormWatch will be finished in a catastrophic battle, with the team turning on itself. It is also in this age that StormWatch will fulfil its function of facing Brainiac… This group travels in Eye of the Storm, a giant ship they stole from the daemonites and which remains hidden from any detection thanks to travelling at lightspeed on a circle around the planet, inside hyperspace. It’s pretty much their version of the Carrier, and it can even create teleporting Doors. Unlike the Wildstorm ones, though, these doors can be summoned non-verbally.

This team gets to have four different versions of their ship:

What lies in the future for this team? We shall find out in “StormWatch”, vol.3.

Next: Spotlight on the daemonites