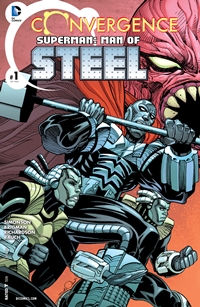 As with every Convergence story, Telos forces two groups to fight: From Metropolis’ side, representing DC, you have Steel and his niece and nephew. On San Diego’s side, representing Wildstorm, you have Gen13. The kids have been hanging out ever since San Diego was trapped in a giant dome and they lost their powers, but when the fights are announced they get their abilities back. But trouble is added to the mix when supervillain Parasite breaks out of prison!

Since Wildstorm characters are psychopaths (sigh) Burnout attacks Steel directly instead of worrying about ethics or trying to talk. Being five against one, they manage to overpower the old man, but then his nephew Natasha gets in the way. Trying to save her, Steel gets his suit destroyed. Right at the same time, Parasite shows up, and without Steel it’s just a bunch of inexperienced kids against him… At first the Gen kids think the monster is working with Steel and attack him all at once, but all they manage is for Parasite to steal all their powers! The only way I see this being justified is because the Gen kids were taken from their dimension at the start of their run, when they were newbies, even though the writer lacks the skills to have them use appropriate slang. While they’re distracting Parasite, Natasha grabs his uncle and gets out of there.

Steel ends up bedridden and with his back broken. While his niece and nephew go rejoin the fight, Steel tries a risky transfusion of techno-organic nano-particles from the dome that will invade and replace his damaged tissue and give him a new suit. Meanwhile, his niece and nephew watch as the Gen13 kids fight hopelessly with the Parasite, having their powers drained. However, Caitlin’s leadership skills come through in the end and they manage to combine their powers to capture the monster. While they’re softened up, Steel’s kids attack, and they start moping the floor with the Gene-actives. Just about then, Steel shows up with his new powers, and the fight begins all over again.

But one doesn’t join the fight: Caitlin. She starts thinking the whole thing is dumb; they were told it was kill or be killed and acted on instinct, without thinking. But now she’s starting to wonder why they’re going along with whoever’s behind all that. As they fight, even Roxy realizes Steel and his family aren’t bad guys, they’re heroes. Both sides decide to stop the fight and work together to stop the real bad guy, and after three stories just like this this ending is getting cliché’d. However, there’s a twist. When Steel tries to bring the fight to the entity and hits they very city they’re standing on, a portal opens and sucks the Gen 13 kids away. There are no clear winners this time.