Flashpoint is the event which creates the new DC Universe and fuses it with the Wildstorm and Vertigo. It’s centred on the Flash, who after going back in time to prevent his mother’s death, changed the world’s timeline and altered history forever. The book reveals that originally the DCU, Vertigo and Wildstorm were all part of a single timeline, and Dr. Manhattan split them in three to weaken Earth for his invasion. Meaning that when Flash went back in time and changed history, what 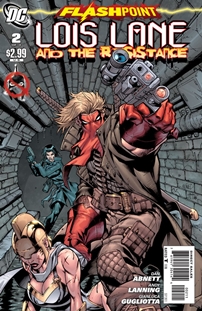 actually happened was that these timelines got back together “like they were meant to be.” It’s better not to think about it too hard. In this new timeline, Wonder Woman and her amazons declared war on Atlantis and took over the United Kingdom. Now flash and the other heroes have to work together to change this apocalyptic timeline and make things normal again.

One of the few Wildstorm characters to appear in the event is Grifter. Cole doesn’t appear all that much, but we get small glimpses into his character, his personality and the ways in which these differ from his previous incarnation.

Flashpoint Grifter appears for the first time in Flashpoint #3, during one splash page in which he welcomes Lois Lane to his Resistance. This continues in Lois Lane and the Resistance, a three-issue miniseries. It is written by Abnett and Lanning, Wildstorm veterans who handled the first year of Authority post World’s End. Grifter appears in the second issue, and he gets to be in the cover! We’re introduced to this timeline’s Team 7, the best black ops America could assemble during Afghanistan: Grifter, Sergeant Rock (from Our Army At War), Lieutenant Reid (Magog), Kate Kane (Batwoman), Zinda Blake (Lady Blackhawk), John Stewart (Green Lantern) and Gunner (from the Losers). Basically, all characters who had ties to the military in the old DCU. All of them but Grifter die on the following page, killed by crazy Muslims, and Grifter needs to be saved by a new character called Britannia (Penny Black). Grifter mentions being a telepath, which makes you wonder how on earth he got his powers. He touches Penny’s armour and apparently establishes a technopath connection which her – which causes him to get a puppy-crush. It feels a bit unbecoming.

Once this Team 7 flashback is over we return to the Resistance, and one realizes Grifter is still wearing the same clothes he wore back in his Team 7 days. Nowadays he’s become an infamous leader. He didn’t plan it, but he had no choice but to assemble a group of weirdos after the Amazons took over the United Kingdom. That does sound like our good old Grifter, who unlike most DC heroes he murders amazons without blinking. In the end the Resistance and Lois Lane reunite with their informant, none other than Penny Black, and they’re ready rush forward to the final battle in Flashpoint #5.

Before the climatic conclusion, however, Cole is seen in a couple of comics. He appears in a montage sequence in The World of Flashpoint #2, while Circe explains that the heroes in this world are no different from its villains; “they are all out trying to shape the world their way. Everything is a matter of perspective.” I suppose that’s as much insight to Grifter’s psychology as we’re going to get. In the following issue of this book, the main character jumps into the final showdown of Flashpoint #5, and Grifter can be seen in a panel killing atlanteans. He’s also seen in Flashpoint #4: he’s behind Enchantress as she speaks about her team, the Secret Seven. Kind of weird, because Cole belongs to The Resistance.

On to Flashpoint #5: Grifter joins the final battle and he gets a double page spread as his group comes to save all of the main character’s butts. Sadly, he is murdered in the following page by Enchantress, screaming “Arzzz.” Make of that what you will.

During the final pages, when Pandora is merging the timelines to form the new universe that becomes the New 52, we get a glimpse of the old Wildstorm Universe in which the artist draws Zealot’s uniform wrong. In a way, that’s classic Wildstorm shenanigans. When they show the New 52 universe Grifter gets to stand in the middle of the Justice League, front and centre; that’s pretty cool.

Another Wildstorm concept is shown in the pages of “Deathstroke and the Curse of the Ravagers”, where there is a woman called Jenny Blitz with the capacity of causing things to explode with her mind. It was written by Jimmy Palmiotti, Wildstorm veteran from “21 Down”. I asked the author on Twitter if Jenny Blitz was a century baby and he said “sort of”, so I suppose it is left to our interpretation.

In the end all the timelines are united together, but Doctor Manhattan steals 10 years from history and reality gets twisted, that’s why everything is different instead of just the old WSU fused with the old DCU. The New 52 timeline is created… and many Wildstorm characters are born again.

Next: “Demon Knights” issues 0 – 23 by Paul Cornell and Robert Venditti