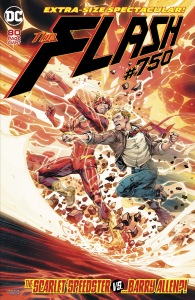 Since the blog that inspired me, Weathering Wildstorm, came back, I figured it was fitting for me to do a new post as well!

In Flash #750, coming off the series “Flash Forward”, Flash Wally West sits in the Metron Chair, an object from the New Gods that grants him omnipresence. With it, he’s able to see every Earth and timeline from the past and present, and upon seeing the Wildstorm Earth, he mentions its heroes are “more wild and unpredictable than he could imagine.”

That’s it for this one-panel cameo, though there are a few things that bear commenting: For one, Deathblow was mistakenly coloured black. Could this be caused by his new black incarnation in the pages of “The Wild Storm”? Secondly, this is the first time we’ve seen Union and Backlash since the end of the old WSU in 2011, and Backlash is, of course, drawn by his legendary artist Brett Booth.

Side note: Some of you might have wondered if there were some Wildstorm cameos in “Doomsday Clock” issue 12. The answer, sadly, is no. Just copycats. This isn’t Zealot:

And this isn’t Fuji:

This comic is really fun. The writing is constantly witty, keeping things moving and not drowning in the 90’s feel as this could have been, considering it’s about harpoon-hand Aquaman. Anyhow, Talos is making different universes battle each other, and now it’s turn for 90’s Aquaman VS Classic Wildstorm Deathblow.  That’s the weak point… Deathblow. It’s written as appallingly one-dimensional, little more than a psycho that kills without remorse and is willing to do anything. A crazy military man that gives the old WSU a bad image. “I once hid in a latrine for FIVE HOURS to take out some chieftain in Wazirstan,” he says. This sounds like Cray… “Made sure he suffered for keeping me waiting.” And THAT’s where it ruins it.

Still, he’s smart. Cray’s first move is to break into D.E.O.’s installations – watchdogs of superheroes with a database – and look into Aquaman’s weaknesses. Then he must get into S.T.A.R. Labs, where Aquaman is staying. He immediately starts shooting all the civilians, hoping to shock Aquaman and desestaibilize him. However, Aquaman has super strength – all it takes is a strong punch for Aquaman to break Cray’s neck. And guess what? Cray comes back to life. I mean yeah, that IS his super power, but it doesn’t work as quickly as that. He’s not Wolverine. So Aquaman is faced with an enemy he can’t put down. How will he get out of this?

And thereby lies the problem to this story. Did you read that? Aquaman is the hero in trouble, Deathblow is some villain. Convergence was announced as a tribute to all the characters who haven’t been around us – but this isn’t respect. The DC character gets a much nicer spotlight than the Wildstorm one.

One way or another, the fight goes on. Aquaman gets some water on him, which boosts his strength. Cray needs some help, and he remembers the files he’s read – he knows about S.T.A.R. Labs insurance policy on Aquaman. Using his I.O. training, he gets inside a computer and hacks the “Drydock” program active. As it turns out, Aquaman’s friends had installed a dehydrator system in case Aquaman went rogue – Aquaman loses what little trust he had. Still, his friends come around when he needs them the most. Aquaman is about to get beaten by Deathblow when his friends whisper him an idea through the coms – he can get still water in the form of the blood inside Deathblow! It’s nasty, but it works, since Deathblow can’t die. Aquaman uses his harpoon hand, stabs Cray’s neck and bathes on his blood. This gives him the edge he needed, and he wins the fight. They tie Deathblow up, and Aquaman wins the fight. The Wildstorm city vanishes… to be continued in Convergence.

Next: “Convergence: Batman: Shadow of the Bat” issues 1 – 2, written by Larry Hama. 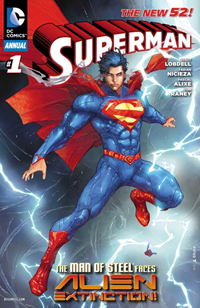 This is it, the big issue that brings all the storylines together. After recovering the Blue Flame from “Voodoo”, Helspont makes his ship visible over Metropolis, defying Superman to come face him. He shows him his true abilities now, including a new and sleeker suit created with the remains from several alien species. Helspont throws Superman against the moon with a single punch; no big deal for him, he has killed Kryptonians before. His old crew starts spreading out around the globe, searching for alien races to recruit. They are his most faithful men, those with whom Helspont shared his Blue Flame powers so many years ago: Salu, Biomass (a titanothrope; NOT the same Biomass from the “Majestic” series), Quom (not to be confused with Quon?), an unnamed old lady and Lord Defile, with his Worldstorm look. Helspont plans to build the “Union of the Thirteen Scions of Salvation”, a council of species which used to be a fairy tale in which the universe was led properly and fairly.

Salu finds the Martian Manhunter, Quom finds Starfire and Defile meets Hawkman; they tell them about the idea before Helspont summons his men to regroup.

When Superman wakes up from his beating, he finds himself inside Grifter’s escape pod, right after Cole and Deathblow escaped from Helspont. I suppose this means Helspont changed costumes in less than five minutes. The three heroes are intercepted by Biomass, so Superman fights him and throws him into Helspont’s ship. Helspont is amused to see the kryptonian, and he orders his troops to kill as many daemonites from Earth as they can. This is the great “alien extinction” heralded in the issue’s cover. Most daemonites on Earth die, and their invasion plans are destroyed. It’s also safe to assume Myev died too. Helspont sends their pain straight to Superman’s mind, subjugating him; Superman is merely an amusement to him. He explains that Superman is actually helping his plans through his constant protection of Earth, since Helspont wouldn’t want his future kingdom to be destroyed.

He leaves him after these words, leaving Superman confused and helpless; even when he’s just doing the right thing he’s still helping Helspont. And he doesn’t know when Helspont will decide to begin his harvest. With all the invading daemonites killed off by Helspont, things come to a pause; this feels like the ending to the first chapter of Wildstorm’s narrative in the new DC Universe.

“Teen Titans” is a bit of a mess of an issue. The pacing and dialogue are all over the place – but it does introduce Deathblow to this continuity. He’s featured as a run of the mill mercenary who may or may not have powers. (“You can’t kill me”, he says – is this a hint of his gen-active abilities?)

The issue is a study of Deathstroke and his personality through different time periods. We see him fighting in Bosnia before his Team 7 days, where he meets Michael Cray, Deathblow. We see him when his son Grant is born, and when he teaches him to be a mercenary like his daddy – After Team 7 Deathstroke only trusts his family. Sadly, a mission goes wrong and gets Grant killed, which prompts Slade to take revenge. This causes him to come to blows with Deathblow, an old ally, but nothing will stop him in his mission. The comic ends with Deathstroke killing his victim and then coming home to his new daughter, Rose. She will appear again in the pages of “Superboy”, where she’ll be involved with the Gen13.

“Deathstroke”, issue #6 introduces Midnighter, who is seen killing Deathstroke’s son. Wait, didn’t Grant die in the Teen Titans issue? I guess he died twice. While normally this issue would be considered more important, it’s a single-page flashback in which it’s merely hinted at that Midnighter is the killer.