Written by Will Pfeifer. 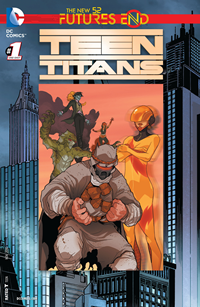 In the Future’s End timeline, Ladytron calls herself Algorithm, for some reason. She hides as a human calling herself Hannah Otto, security chief and girlfriend of Archimedes Grant, mischievous millionaire. The Teen Titans of this timeline go against him because he’s an asshole, so they inevitably clash with Ladytr– I mean “Algorithm.” She remembers the Teen Titans from having clashed with them in the past, as we’ll see in “Teen Titans”. She’s been equipped with ever-evolving security features, including a lethal-force ultrasonic wave generator.

However, she’s not much of a threat. The Teen Titans count with a new member Algorithm hadn’t accounted for: Heretic. He cuts Algorith in half. She keeps rebuilding herself, and Heretic keeps cutting. This is stopped when Teen Titans member Klarion, the witch boy turns Algorithm into butterflies, ultimately proving that magic trumps science. Not a lot more happens in this issue other than the Teen Titans kicking the crap out of a rich guy with no powers.

Honestly, this is so far removed from Wildstorm that I had to ask the writer on Twitter if she really was supposed to be Ladytron. Surprisingly, he confirmed this.