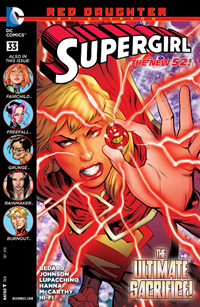 There’s not a lot I can say about this 2-pager backup. It was meant to set up a future Gen13 series, going back to their roots (if they don’t wear their original costumes inside, they do on the cover) and forgetting all the weird New52 developments. In this story we see a Caitlin, which looks like our old and REAL Caitlin, destroying all the New52 clones we had seen of her. She says hopefully the rest of her team can finish off “the kryptonians”, suggesting they’re in the middle of a fight involving the Superman family. Finally, we see a roll call with all the other Gen13 kids, back to being their old selves — Freefall, Burnout, Rainmaker wears her old costume, Grunge is not a villain anymore and he’s alive — plus there’s one more member: Superboy. This makes sense, considering Superboy and Caitlin have been entangled since the beginning of the New52. Caitlin also mentions “finishing off that clone” implying the Caitlin we have seen in previous comics was just a fake one, and not the real Caitlin. Sadly, we never got to know what this backup meant, because this hints never went anywhere, and this series didn’t come to happen. The writer gets one more shot at writing the Gen 13 in Future’s End, which will be the final “try-out” issue for this hypothetical book.