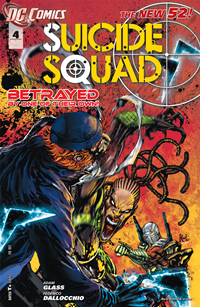 Regulus starts going after his ex-Team 7 teammates, and Waller is the first one to clash with him. She knows he’s actually her old teammate Higgins, so she orders her team, the Task Force X, to go against Basilisk at every turn.

The Squad faces Basilisk for the first time after having dealt with a nanite virus from Basilisk a couple of issues before. One of the Squad’s members, Deadshot, heard the organization was founded by someone named Coil. He’s wrong, though. Coil is a Japanese swordsman with no relation to Basilisk. His criminal activities can be seen in “Katana.” We know the actual founder was Kaizen Gamorra.

Anyhow, Basilisk’s members are portrayed as fanatic and relentless, even shouting “Hail Basilisk” before blowing themselves up in classic Hydra fashion. Eventually, the Suicide Squad is surrounded and taken to high-ranking operative Grey Lora. They only manage to escape by giving up one of their members, Captain Boomerang. To survive, Boomerang accepts joining Basilisk. In fact, this was the plan all along: the Squad wanted a member inside the organization.

Little do they know, two can play that game: Issue #8 reveals there is a Basilisk mole within the Squad: Black Spider.

Afterward, the Squad goes against a Basilisk agent who has taken a room full of employees from a bio-tech company hostage. It turns out this man was actually a top agent, guard to the leader Regulus himself. The Squad stops him, but he ends up dead somehow. The Black Spider took him out so that he wouldn’t share any vital information; Waller realizes she has a traitor in her team.

Soon after, the Squad finds out Regulus is hiding in Yucatan, Mexico, so they go after him. Distrustful of the traitor, Waller provides backup for the team. Unfortunately, even one of these new backup members happens to be a Basilisk agent. All of the team’s members carry a bomb in their neck, to keep them from running away, given that they’re convicts. The Basilisk backup punctures her own bomb, causing the plane to explode with the Suicide Squad inside. The team crashes in an island, where they’re captured by Basilisk. They meet Captain Boomerang, who had joined the organization, and they’re taken to Regulus. Of course, Boomerang is only pretending to be a bad guy, and eventually he helps his Squad teammates escape.

But Black Spider reveals his true alignment, knocking Boomerang out and activating a trigger hypnotic word on the other members so they all become mind controlled. Only Deadshot and Harley Quinn remain! But something is off. Black Spider isn’t acting like himself. Deadshot realizes he’s nothing but a decoy; they dispose of him easily. The real Black Spider is at Amanda Waller’s place, looking to kill her. However, she’s baddass enough that she manages to defeat the Spider unarmed. Back in Mexico, Deadshot and Harley manage to help his teammates recover their senses.

Working together, they manage to make their way through the many agents up to Regulus himself. He grabs Deadshot from behind, but Deadshot simply shoots Regulus through his own chest, wounding both of them. Deadshot drops dead, but Regulus’ body is lost in the confusion. Still, their mission was to kill him so the Squad figures they’re good to go. Harley Queen refuses to escape without Deadshot’s body, which complicates everything and forces the Squad to fight through all the agents. In the end, Harley faces Grey Lora. Harley held some feelings for Deadshot, so his death fills her with enough rage that she actually manages to kill Lora. The team escapes shortly after.

A few days later, Deadshot comes back to the land of the living. He was brought back using the Samsara serum: The same formula used in Kurt Lance after the ending of “Team 7.”

The Squad’s next mission takes them to Chinatown, where they have to rescue a hostage from Red Orchid. She’s the sister of one of their members, Yo-Yo. However, when they reach the main room they find she’s with Regulus! He survived after all. The hostage is no other than Kurt Lance; the ex-Team 7 kidnapped in the pages of “Teen Titans”.

Red Orchid and Regulus defeat the Squad easily enough, in part thanks to Kurt’s unfortunate ability of deactivating powers just with his presence. It is explained that Grey Lora was a gift from the Red Orchid to Regulus. So when Lora kidnapped Kurt, Orchid held him until that day. Regulus wants to retrieve him because Kurt is a power tracker, so with him no superhuman would be hidden from Basilisk. In the end, Yo-Yo sacrifices himself to defeat his sister, but Kurt is taken by Regulus.

Amanda Waller herself comes to help and brings out the survivors from the rubble. He tells her squad “Once, I was part of a secret government organization much like you. Regulus took one of my old teammates. This is not business. This is personal.” She asks for help finding him and deactivates the bombs in each of the Squad member’s necks – this is serious. Sadly, the mission doesn’t go very far. They go down the sewers in search of Regulus, but they’re suddenly faced by the Swamp Angels; creatures who live in the filth. They are people whose powers make them too ugly to live in the surface, so they’re interested in gaining Regulus favour, since he promises he can shut down their powers. With that in mind, they start attacking the Squad and they overpower them quite easily. In the end, they’re forced to run back to the surface. Kurt’s fate will be seen in “Birds of Prey.”