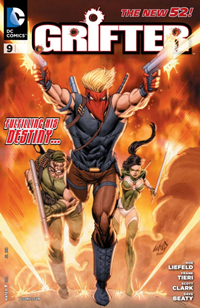 Liefeld takes over the writing duties, and the book becomes much more insane. We start off in the middle of an intense chase as Cole escapes from huge red daemonites. He’s showing superhuman shooting abilities, as his Chosen One powers keep on developing. He gets in a rough spot against an alien when he’s saved by Niko (Chesire), who is included into the cast for no clear reason. She explains to him that the daemonites aren’t just against him; they are doing a full-fledged alien invasion, and there exists a resistance who works against them. This is actually a branch of Warick’s resistance, but this won’t be revealed until later.

After Cole agrees to join their efforts he’s told that the daemonites are unleashing their “warrior class daemonites,” the red guys, because they’re preparing a big final invasion… and because they want to eliminate the Chosen One. This is the first Grifter hears about the Chosen One, and he thinks it’s the stupidest thing he’s ever heard. He’s even more amused to hear that the Chosen One is supposed to be him, a guy who’s spent his whole life cheating, lying and stealing from people. How does Niko know that Cole is the Chosen One, or that he’s a grifter? Something is up. Still, Grifter and Niko go to a rendezvous point, where they meet some allies, including Deathblow! In this timeline he doesn’t have any of his old background, yet he keeps his old look for some reason, like his Team 7 red marks.

As Cole and his new team of ragtag soldiers attempts to move to a new safe house, they’re intercepted by daemonites and their transport is destroyed. They get surrounded, so Cole is forced to awaken his Chosen One abilities: He can now read anyone’s mind and control objects through telekinesis. He’s even able to lift a dozen warrior daemonites and his truck into the air at the same time, throwing them off a cliff and saving the day.

The group reaches their safehouse, even though only Grifter, Niko, Deathblow and a guy named Buck survived. Cole is starting to suspect there’s a traitor among them: how could the daemonites know how to find them? Before they can discuss it, though, the safehouse is destroyed by a huge daemonite with human shape who calls himself Synge.

Although Synge never explains his origins; we learn later that daemonites originally looked human, so we can guess he’s ancient and a tough sucker. The good guys can barely scratch him, and Buck gets killed. In the end Cole manages to lead him to a nearby forest, where he puts the limit of his telekinesis to test and throws the entire forest on top of Synge. There’s no time to celebrate, though, as Niko reveals she was the traitor and shoots Cole and Deathblow down. She’s not being controlled by a daemonite; she simply sold herself out because she wants to be in the winning side. She takes them to her master, Helspont, and even Synge turns out to have survived.

Helspont is cheerful that the one threat he was constantly warned about, the Chosen One, is now captured by him. We find out that he started a secret faction, secretly helping the other daemonites with their invasion so that he’ll take the planet from them once they invade it. He’s also gotten a new stylish armour, apparently. Wishing to test Cole, he sets up a fake ship through psychic illusions and deals with him in this fake environment. He asks Cole to join him in taking the other daemonites down, but Cole just laughs. He had figured out Niko early on, so he let himself be captured to get close enough to the big bad to kick his ass. He claims he had even held back against Synge (even though his thoughts clearly showed he hadn’t). Anyhow, Deathblow fights against Niko while Cole goes against Helspont. He’s able to get Synge out of the way with a mere movement of his hand, and he overpowers Helspont psychically without much of an effort.

In the end, Cole kicks Helspont’s butt. At one point Helspont is so hurt that he starts looking like a regular daemonite, without his flame; but we’ll learn later that Helspont’s true face looks human, so this must have been a show put on by Helspont, considering this is all an illusion, to give Grifter hopes. Deathblow sets the ship to self-destruct and the good guys get on an escape pod. Of course, the entire time they had been inside a fake ship constructed by Helspont, so I guess only the escape pod was real? Helspont is satisfied; now he knows what he’s dealing with. The way he tested Cole is very similar to the way he tested Superman in “Superman”. He lets Grifter go; he’s not scared of his “Chosen One” abilities anymore, so he’s better off on Earth exterminating the daemonites who don’t work for Helspont. His true plan begins now.